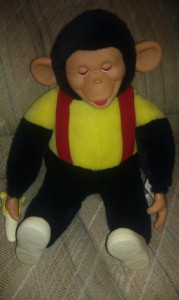 Do you remember this old toy monkey? He was popular in the 60’s and 70’s and I loved him! When I was 5 years old my best friend had a monkey just like this one. I wanted one just like hers. We were poor and I was the baby of five so I knew that getting one from my parents was out of question. So, I prayed. Before I went to bed I prayed and ask God for a stuffed monkey with a banana in his mouth. Oh, I didn’t stop there. I even ask God to put it on my front porch when I woke up. I knew my Daddy cared about what I knew I really needed and had no doubt that He would provide. I got up that morning and ran straight to the door. Imagine my face when I looked down to see that my dog had dragged a stuffed monkey home that night and placed it at my front door. I hugged that monkey and looked up to my Daddy and said, “thank you.”

That was nearly forty years ago…. It was the first prayer I can remember God answering for me. I gave that monkey to a hurting little boy years ago but God allowed me more monkeys to remind me that He is a God who cares and hears our prayers when we have faith to believe Him. I honestly believe that is why I have such great faith in my Father. I have learned that He can be trusted and He knows what I need. God has often reminded me of that answered prayer when it looked like Hosea’s House was never going to happen. When days turned in to months and months in to years. Five years it would take for my vision to come to pass. So often God would remind me of that sweet little monkey.
When I was wondering if I should go part-time and work on Hosea’s House I ask God to
confirm that by sending me another monkey. Something I honestly thought was impossible since I hadn’t seen that monkey since the early 70’s. Within a week of that prayer God sent me two monkeys. Isn’t He just like that? Just when you think you can get one over on Him He gives you double. I remember laying in bed holding that monkey and crying because I remembered how I felt when I was five years old. God is so good!

God can be trusted. Do not let the enemy rob you of your promise land. God has more monkeys in the store house. What is it you need to believe God for? Be still….and know that He is God. Psalms 46:10. I can’t wait to hear your story.

Not every abused woman has visible bruises. Some appear successful and maintain an “everything’s fine” facade on the outside. That doesn’t alter inner suffering. According to the statistics, one in three women suffers some sort of abuse, whether it be physical, mental or emotional. Ask Joann Rowan. She’s worked with abused women for the last 20 years. “We wear masks to make everyone think everything’s good,” she said. “But inside we’re just a dressed up mess. It’s so hard to reveal our stuff. We’re more worried about what people will think than whether we’ll survive.” Teresa Oechsli had her own front row seat to abuse. As a child, she watched her father hold a gun to her mother’s head. Witnessing that abuse colored her perception of life and relationships. Vicki Stagnuolo understands abuse. She survived abuse as a child and two abusive marriages. She is now a counselor. “If one in three women is abused, what makes you think it’s not the same in the church?” Rowan asked. These three women lead a new abuse support group at Southeast called Mending Hearts. They began to work together four years ago after their friend, Jeanette Spencer, was murdered. It happened the weekend they’d planned to attend a Faces of Christ Retreat at Country Lake. Spencer failed to show up at the rendevous time. They dialed and redialed her cell phone throughout the day, but learned the next day that she’d been murdered in her apartment building elevator by the ex-boyfriend she feared. “Jeanette’s death made us want to do more for women caught in abuse,” Oechsli said. “When I met Jeanette, God didn’t say to mentor her or counsel her—just be her friend. And that’s what we want to do with the women who come to this group. We want to walk beside them as we go through the Twelve Steps to Spiritual Healing, a Christ-centered program to wholeness. Forgiveness and healing is the goal. “Many women living with abuse think they are the only ones,” Stagnuolo said. “One of the major reasons women stay is shame and embarrassment. Especially in the church. But if we focus on Christ, the shame and embarrassment falls by the wayside. We can hold onto Christ together.” For years, many women try to “fix” the problem. “So many think if they lost 10 pounds, had a different haircut, cleaned the house, cooked a better dinner or looked more like women on the Internet, the abuse would stop,” Rowan said. “Women who are abused do not ‘deserve’ what happens to them.” Oechsli said the group will be confidential. Jan Freibert, who is head of support/recovery groups at Southeast, said even she will not know the identity of those who attend. “I feel so good about the leadership of this group,” Freibert said. “Each one understands abuse, and each one is biblically grounded and committed to reaching out with support, encouragement and prayer.” Oechsli said fear keeps many women trapped in abusive relationships. “This group will be a safe place to heal,” Oechsli said. “If my daughter were in an abusive relationship, I would tell her and her children to leave and be safe. God doesn’t want His children to suffer abuse. We’ve seen lives change when healing and forgiveness become part of the rebuilding process.”

Hosea’s House is a non-denominational, non profit organization dedicated to empowering women & children in crisis by extending the love of Christ. The goal of  Hosea’s House is to develop relationships with women & children in crisis and walk with them during their process of healing by offering friendship, counseling, Bible study, education, life skills, home management, parenting skills and community involvement. We base our program on Biblical principals and provide Christ centered guidance to women and their families.

Hosea’s House partners with Bible Community Fellowship in Portland. Our desire is to allow the Church to minister to the broken and to be a light in the community in which they serve. We believe that only Jesus Christ has the power to completely heal and restore.

At Hosea’s House we understand broken hearts. We want to invite you to one of our support groups. If you are hurting and would like the love and support we offer through the Love of Christ please come visit us at one of the times listed below:

My name is Karen Lackey and I would like to share with you how God led me to RoseHaven… I was saved on January 17, 2003. My family has been broken since my children were very small. Sebastian is 10 yrs old. My father and stepmother raised him from the age of two. My daughter Samantha is seven and is at St. Joseph Children’s Home in Louisville. I was married to Samantha’s father for 5 years. We were together on and off for 8 years. Needless to say this was not a Christ centered relationship. After one of our many violent separations and Samantha’s placement in foster care, my sister and stepmother decided that tough love was not the answer. They were going to show me Christ’s love. I was in West Virginia and they brought me home to my father’s house in Indiana. This is where I gave my life to Christ. But again, I went back to my ex-husband, after he too was saved, but we both fell back to our old ways.

After a year of total darkness and more hurt than I could say, God gave me another chance. On January 7, 2005 I boarded a Greyhound bus and came to Louisville where my daughter lives , and to stay at the Center for Women and Families. There I rededicated my life to Christ. I lay face down on the floor and gave Him everything. He came into my heart like a I had never experienced. All things became new! I had
smoked since I was a child. I have not had a cigarette since that day.

God led me to Southeast Christian Church with Teresa Oechsli. She is involved with Twice Touched Ministries. They meet the medical needs of the less fortunate, and then share Jesus Christ with them. One Sunday they gave out the Southeast perpetual prayer calendar, called the “360 Join the Revolution.” On February 7th I turned my calendar to pray (my prayer had been to find a place where I could heal, learn to walk with God, and have a place for my children). This was the February 7th prayer… “RoseHaven, a transitional home for women and children in crisis, whose lives have been disrupted by several things, including, domestic violence. Pray that each women and child will come to know Jesus Christ as Savior and Lord. Pray that God will continually provide space for those in need.” I prayed right then, “God if it’s your will, open the doors. If it’s not I don’t want to go.” A week later Alison, my advocate at the center called me to her office and said, “I hope you don’t mind, I called RoseHaven and all I can say is, Wow!!” Two weeks later I moved in to the room, home, and family of believers God has been preparing for me. It is in His time, but when we seek Him, He will not let us down!! We serve an awesome God!! Jeremiah 29:11-13, “For I know the plans I have for you. Plans to prosper you and not to harm you, plans to give you hope and a future. Then you will call upon me, and come and pray to me, and I will listen to you. You will seek me and find me when you seek me with all of your heart.”

Description We are in need of volunteers for our community Thanksgiving dinner. Volunteers are needed for set up, food preparation, servers and clean up. If you are interested in showing this community the love of Christ and being the Acts 2 Church this service project is for you. I hope to see you there.

We are praying that we will have a box of food for each family to take home and cook on Thanksgiving as well. We need your help to make this happen. Donations need to be turned in by November 15th.

Welcome to WordPress. This is your first post. Edit or delete it, then start blogging!